On February 24 at 8:02 p.m., officers were investigating a suspicious vehicle in the parking lot of an apartment complex on Aldermans Place when they observed a car drive through the lot and strike a parked vehicle. Officers were able to stop the car as it attempted to leave the scene of the collision. Upon further investigation, officers recovered two fully loaded firearms from a passenger who was in the striking vehicle – one was a fully loaded polymer 9mm “ghost gun” – meaning the gun did not have a serial number – with a loaded extended magazine and the other was a 9mm semi-automatic handgun, which was reported stolen in another state. Both guns were in the passenger’s waistband. A small amount of marijuana was also recovered. The passenger, Chaun Darnell Walker, Jr., 21, of Waldorf, was arrested and charged with possession of a loaded firearm on a person, illegal transporting of a firearm, possession of a stolen firearm, and other related charges. The driver was issued traffic citations. On February 25, a judge released Walker from the detention center on the condition he meets the requirements of electronic monitoring. The investigation is continuing. 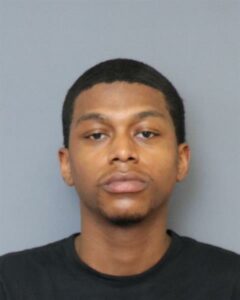