On January 19, members of the Charles County Sheriff’s Office (CCSO) Narcotics Enforcement Section served a search warrant in Waldorf as part of an investigation into drug distribution. Investigators recovered approximately 65 grams of crack cocaine, manufacturing and distribution paraphernalia, and a loaded 9mm handgun. A check of the handgun revealed it was reported stolen from another state. The suspect, Anthony Antonio Peaks Jr., 27, of Waldorf, is also prohibited from possessing a firearm due to a previous felony conviction. Peaks was arrested and charged with possession with the intent to distribute drugs, illegal possession of a firearm due to a previous felony conviction, illegal possession of ammunition, and other related charges. On January 20, a district court commissioner released Peaks after paying 10 percent of a $3,000 bond. The investigation is ongoing. 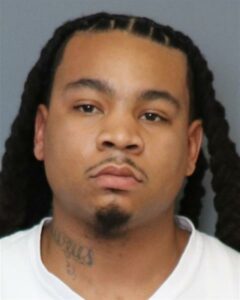