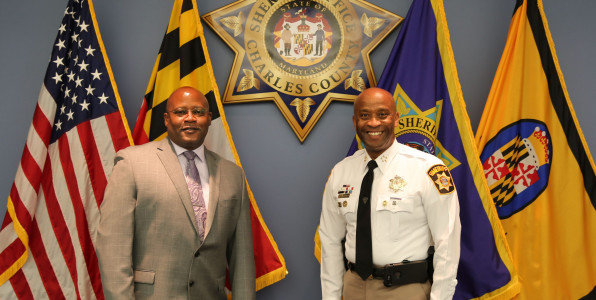 Charles County, MD…In keeping an open dialogue and in the spirit of transparency, Sheriff Troy D. Berry is providing an update announcing the most recent changes he’s made as part of his efforts to increase diversity within the Charles County Sheriff’s Office. “I know it’s important to our community that our agency reflect the community we protect. One of the first things I did when I was elected Sheriff was put together a strategic plan in terms of recruiting and hiring a more diverse workforce. I knew this would be a long-term plan, but we have indeed made progress and I want to share this information as to where we are in terms of our plan,” Sheriff Berry said.

Recently, Sheriff Berry made promotions within the agency that will become effective November 7, 2020. “These promotions will change the agency as it relates to diversity,” said Sheriff Berry. Specifically, for the first time ever, with the promotion of Mr. Brian Eley to Chief of Staff, the Charles County Sheriff’s Office will now be one of only two Sheriff’s Offices in the State of Maryland with an African‐American Sheriff and an African‐American as the second-in-command.

Background: Upon taking office in 2014, Sheriff Berry hired Mr. Brian Eley as the civilian Director of the Agency’s Administrative Services Division. “As a retired African‐American commander from the Sheriff’s Office, Mr. Eley brought a level of knowledge and understanding of our Agency and the community we serve, as well as the vision needed to correct the lack of diversity within the office. I immediately named Mr. Eley as the point-person for creating the diverse environment I was seeking,” said Sheriff Berry. In 2017, Mr. Eley was promoted to the Assistant Sheriff of Administration.

“Today, more than ever, recruiting people to become a police officer is a challenge for every police department nationwide. In 2014, we made it a priority to recruit, hire and retain officers of the highest quality with special efforts being directed towards creating more diversity,” said Mr. Eley. Under Mr. Eley’s direction, below are some of the accomplishments the agency has made:

“Based on all we have done, we have seen changes and we are moving in a positive direction. The Sheriff’s Office is now at 45% minority among all employees and 28% minority among sworn police officers. These are small but significant changes and we must continue attracting people to our agency with a special focus on minority applicants. It takes time to hire potential police officers; however, we are making strides. Not only do we have to attract good, qualified applicants, we must remain focused on encouraging minorities to apply. More and more we are seeing police officers from other departments making lateral transfers to our agency,” said Mr. Eley.

“At the same time, we are also seeing the impact of our hiring and promotions with sixteen sergeants and four command-level officer positions held by minority officers and females,” Sheriff Berry said. With the promotion of Caroline Baker to the rank of Captain, the CCSO will now have two women at the rank of Captain.

“I’m sure you will agree with me that having the Sheriff’s Office reflect the diversity of the community is beneficial to the entire County and I am pleased with the work we have done to increase our diversity. With that being said, we are not done. My desire is to reach diversity benchmarks throughout the agency which have a direct reflection of the community,” Sheriff Berry said.

“We will continue to work with organizations such as the Charles County Chapter of the NAACP, local government, minority churches, schools and universities, and other local venues to encourage minorities to apply for the position of police officer. I believe in order to make change, we have to have people willing to be a part of that change and I believe our efforts are working. We certainly look forward to any assistance community organizations can provide to help us reach our goals,” said Sheriff Berry. For more information about the Charles County Sheriff’s Office, visit www.ccso.us.