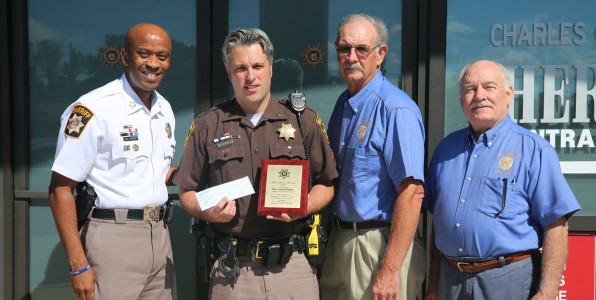 On Wednesday, August 17, the Sons of the American Legion Squadron 82 presented its Police Officer of the Year award to Police Officer First Class Vernon Warker.

Pfc. Warker was selected as the recipient of this honor particularly for the courage he displayed during an incident in May of 2015. Pfc. Warker was the first on the scene of a house fire in Waldorf and learned that there was still one person trapped inside the house. Without hesitation or any protective gear, Pfc. Warker pushed open the locked front door, went inside the smoke-filled home, and dragged the man out to safety, saving his life.

Adjutant Gary Shupe and First Vice Commander G. Gale Willett presented the award plaque. “As a first responder, you are expected to be many things depending on the situation that faces you,” said Adjutant Shupe. “What Pfc. Warker did that day went beyond expectations and was something police officers do not typically train for. His instincts kicked in, and the man would most likely have died that day if not for Pfc. Warker’s heroic actions.”

“We are very proud of the brave, quick actions Pfc. Warker took that day. He was everything we could hope to be if faced with the same situation: calm, selfless, and courageous,” said Sheriff Troy Berry. “We thank the Sons of the American Legion Squadron 82 for recognizing him with this honor.”